I was recently working on setting up an elasticsearch cluster with apache whirr. Setting up a cluster is one thing and running it is entirely different. Running a cluster is far more complex than setting one up. Things are no different for an elasticsearch cluster. There are several things one needs to be aware of and take care of. Some of such things with ES cluster are:

Even though elasticsearch documentation talks about a Node, it is not very clear and helpful. It just talks about making a node non-data node. In reality one can have following possible node types in a ES cluster:

Another important setting is http.enabled. When this is set to true, a node provides an HTTP transport. What that means is it provides a API access over http. Now with above four node types, one can create data only nodes and disable HTTP transport. By doing that, we make sure that the data nodes are not doing any other work than just indexing and performing queries. Internal communication between nodes happens with a module called Transport.
In case, one goes ahead with a no master and no date node i.e. load balancer node; such a node passes queries to available data nodes in a round robin fashion. This is not be confused with AWS load balancers. This is an ES mechanism to query all available data nodes. In case of heavy traffic, all queries would never go to one single node with this setup. This node type can also be achieved by setting node.client to true. This was also discussed here.

Another key question comes up is how many machines to start with? Should we start with 2 or 10? ElasticSearch does provide fantastic facilities in terms of automatic shard allocation. But does that mean we can start with 2 machines and scale upwards up to 100 or even more? The answer is, as always: it depends.

Replicas can be defined dynamically. One can change number of replicas after creating an index first. Number of replicas dictate search performance and cluster availability. On adding new nodes elasticsearch would automatically assign some shards and replicas to a node.
Lets see an example of 3 node cluster, one node acting as a load balancer and other two just as data nodes.

The data nodes have http.enabled set to false too. Therefore, the machine with no data acts as the entry point into the cluster. All queries go through this machine. If we now add say two machines to this cluster, it resized itself to below configuration. This is because we have a replication factor of 1. 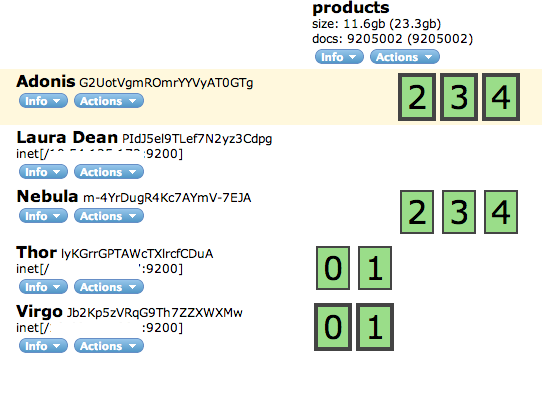 New nodes have been assigned two shards each, one being active and another replica. What happens if we take one node down? 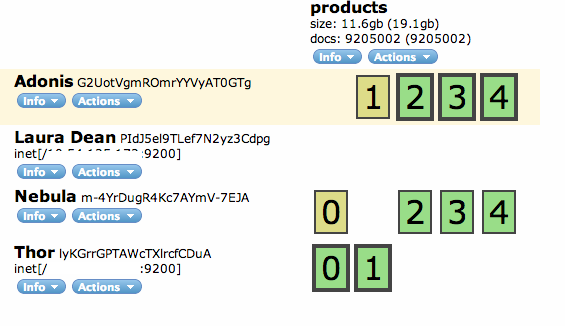 The cluster reassigns shards hold with the down node to other nodes. In this case assigns shards 0 and 1 back to the original machines.  During the time shard relocation is happening one may experience some slowness in query performance as data, potentially huge, is being moved.

Number of indexes depends on the application in question and related design. Generally putting too much data in a single index would not be optimal. For datasets such as logs, its easier to see data going into daily/monthly indexes. With other data sets, one would need to understand the data, processing needs and devise a methodology to define indexes e.g. one index per client.
While creating multiple indexes, it would be beneficial to define how many shards a single node holds because there is a finite amount of data one node can hold.

ElasticSearch provides several client libraries including one for Java, Python. How fast one can load data into a ES cluster depends on several things:

MySql, did you say MySql?

If your input data happens to be in mysql, getting data fast from it would dictate your indexing performance. If the data is in several million records, doing a normal pagination to get data would be slow. Queries like below:

would take ages as it needs to look into all of millions of records. A workaround would be fire a query like below:

This query would perform far better to return results. This is assuming we have such an id column in the table, if not create one in the same table or create a new sequence table to hold a primary key and an auto incremented id field.

Storing the indexes without any compression would take lot of disk space. For my tests, with close to 9.2 million records the index took ~ 18.3 GB. With compression enabled (available only in version > 0.19.5) it came down to 11.6 GB. That is a saving of ~30%. The setting that one needs to put up in elasticsearch.yml is: